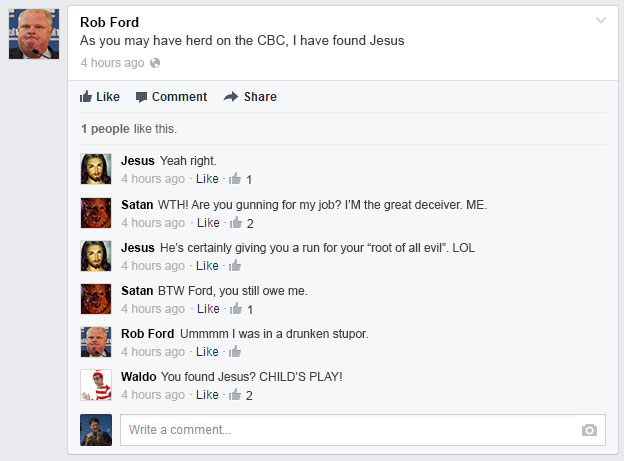 One morning ten years ago, I attempted to have a phone conversation before having had a cup of coffee.

John Fucile was on the other end of the conversation. Unable to piece together most of what I was uttering, John suggested that I never answer the telephone without first having had a cup of coffee at some point during the day.

I have abided by this rule ever since.

A cocaine deal gone awry. Produced for PROJECTproject’s Doppelganger Video Project, in which teams of improvisers shoot unfinished scenes which are then completed by different teams of improvisers in a live performance. BLEW was shot in 90 minutes on May 26, 2010; edited in 9 hours; and screened on May 27, 2010, as part of the Combustion Festival.

The first complete stranger to ever recognize me from a production that I had done was a homeless guy on Queen Street trying to sell me some hash.

Ever since then, nothing surprises me.

Occasionally, Acts of God are shown on television. Because they are so very rare, miracles, when witnessed on a media so saturated with middle-of-the-road content, are quite amazing to behold.

I witnessed a miracle on television yesterday.

If you were part of the 75% of the population which statistically stayed home for New Year’s Eve or if you happened to be channel surfing when it happened, you too may have witnessed this miracle.

Every channel worth its weight in solemnity had some sort of slow-dissolve coverage. Clicking on the remote like a game show buzzer, I surfed from France’s exploding Eiffel Tower to Norwegians peacefully playing music on instruments carved from ice to the Pope trying hard to move to Nigerian musicians trying hard not to move in 90°F heat to previously-taped footage of celebrations throughout Asia and Oceania. I was everywhere at once.

One of the stops on my picture-box journey was Amsterdam. There were thousands of people dancing in the street – disco boomed from massive Peavey amplifiers. People were hugging and screaming, “I love you, Everybody!”, into any available camera. Never before had so many smiles been shown in primetime. As CAMERA 1 panned across the throng of joyous Dutch revellers, the frame came across one young man as happy as any. In his hand, CAMERA 1 clearly showed, was a super-size hand-rolled “cigarette”. The shot was held for atleast 3 or 4 seconds. CAMERA 1, upon realizing the the man was smoking the largest joint ever rolled, carefully panned away to some lights shining on a calm old building.

But it was too late. The miracle had already occurred. Millions of people all over the world had been shown some Dutch kid smoking a spliff in public. Granted, that may not be unusual for Amsterdam but some countries – some censors – would have your hands removed for such acts.

Seeing CAMERA 1 realize what was in his frame was the kicker though. Perhaps his delay was the result of second-hand smoke. It was one of those moments that makes television worth watching – unprogrammed and real. A refreshing change from the most demographically-structured New Year’s Eve I may ever experience.