I left the recharger cord for my $50 cellphone sitting on Brooks’ keyboard during a recent trip to California. He and the family left the same day I did, for a 3-week trip back east. So it’s still sitting there. I know exactly where it is. If I wanted it, I could get on a plane, fly down there, take a cab to his house, smash in a window (probably the bathroom window against the alley), retrieve it and make a getaway.

Or, I thought, as any utilitarian might, to merely go buy another recharger cord. So I returned to the store called Factory Direct, Canada’s electronics liquidator, www.factorydirect.ca

That is, I tried to return there.

Last weekend, I happened to be in the neighborhood. But I stepped in and it was wall-to-wall people. Literally, there were so many customers that I could not see any employees except the cashier. And if you’ve ever visited Factory Direct, you’ll know that everything is behind glass cases. I couldn’t simply stroll in, pull something off a rack, slap it down on the counter and fork over Sir John A. MacDonald. Result: Fail.

Today, with more time to spend on a transaction, I entered the store called Factory Direct and I was pleased to see that there were 6 customers and 5 customer service agents, including the cashier. Quelle chance! So I walked to the display case where I had originally purchased my cell phone and there are no longer cell phones there. I follow the display case around the store, like following the colors of a technological rainbow.

I eventually arrive at a small vertical display case sitting atop the real display case. Put simply, they have a lot less cell phones that I remember them having last time I was there. Displaying my batter-dead cellphone, I asked the clerk behind the counter if they had any recharger cords. She said, “No they only come with phones,” and then ignored me and disappeared into a back room. I stood there, looking around for another clerk. They all seemed to be doing things that had nothing to do with selling electronics, putting away some boxes, yukking it up by the cash register. I looked around at all the customers and they too all seemed to be browsing without need for service or checking out some display model of a 5.1 surround sound system. It was as if Factory Direct was nothing more than a warehouse for a company called Factory Direct but the warehouse only ships products, they don’t actually sell them to anyone present. To them, I was another one of those “customers” and we all know what they’re like.

All of the sudden, I felt like I was in La Hacienda, lahacienda.ca

Waiting for Godot is easy. Try waiting for service.

I then decided to wield my mighty consumer hammer, Moolahnir, and I left Factory Direct with nothing, not the thing I came in to get and not the thing that they should have made at least a 1% effort to get me to buy. As Roberta Flack and Donny Hathaway once inquisitively remarked, “Where is the love?”

I walked several doors down the street to another electronics outlet where they had a selection of 3 phones, the cheapest of which was $150, which I of course then had to purchase, simply to make the point to Factory Direct that they can go anguish themselves in their proverbial hoo-ha’s.

So I am now the uncertain owner of a “refurbished” piece of touch-screen hardware that has faked Sony and Ericsson logos on parts under the battery casing. The software has many default settings that indicate a Chinese origin, including several Red Army screen savers and wallpapers resplendent in bogus Apple logos. It picks up FM radio. It has 2 slots for cellphone chips, so it can function with 2 different numbers assigned to it, and provide a unique ring tone for each. It has 2 cameras, one on either side, for which I have not figured out the purpose. There are many options and settings in the software for which I have not figured out the purpose. I am currently reading the 116-page user manual, written in pretty good broken English. The manual boasts of a sustained call duration of “3 hours to 5 hours1”. Literally. They’ve literally used the “1” instead of the “!”. It’s the real unreal deal.

I am a new and uncertain owner of a pseudiPhone. 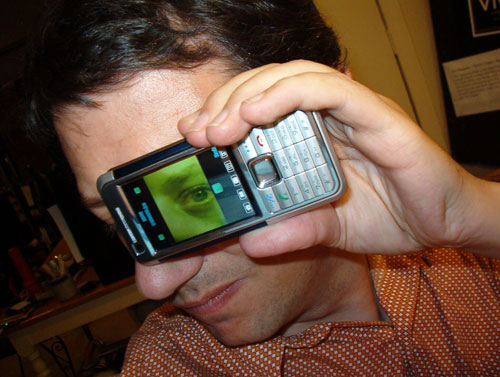