Because inaction as action would have acutely demonstrated to everybody how wasteful and counter-productive the top 20 economies of the world actually are.

Had there been no protests or protesters, no visible action, no civil disobedience for the mainstream media to twist into hyperbole, then there would have been a billion dollars spent on security, solely to arrest one confused homeless guy with a crossbow.

And then you’d have had millions – literally, MILLIONS – more voices closer to your side of the socio-economic debate in which you’re entangled.

Fires are extinguished with water, not with gasoline. If G20 security forces had had nothing and nobody from which to protect the G20 leaders, their presence would have been so obviously unwarranted.

As it is, the protests and riots and vandalism completely justified the presence of ridiculously over-reaching security measures.

What is going on with God these days? I mean, isn’t God supposed to be all-powerful? And yet, if many of God’s followers would have you believe, God is about as powerful as a 98-pound wimp getting sand kicked in his face at the beach and as precious as a baby in a cradle hanging tenuously from a tree branch on the side of a cliff.

The guys from South Park got death threats recently because apparently they depicted Mohammed in a mascot bear suit. To the people who issued these death threats, I would love to ask, “Is the perception of your deity so weak that it cannot withstand mockery?”

Elsewhere, I read a comment in a discussion thread that sprouted from an article about Stephen Hawking’s recent revelation of his fear of alien contact. The comment was from a Christian who was complaining about all the heresy he had to endure in reading the article and the discussion that followed.

Again, just as with the issuers of Islamic death threats, I would love to ask Christians who complain of heresy, “Is the perception of your deity so weak that it cannot withstand an idea?”

We can put a man on the Moon but we can’t cure the lowest common denominator.

140 dead so far in terror attacks in Mumbai… I’m listening to BBC news. And a reporter on the ground in Mumbai quoted some lady as saying, “Only God can help our country now.”

So I’ve got 2 problems with that.

Second – the BBC reporter who allowed this shocked woman’s fear-mongering statement to perpetuate needs to have her ass fired. This is the sort of theological shirking of societal responsibility that allows criminals to go in and murder 140 people (thus far). 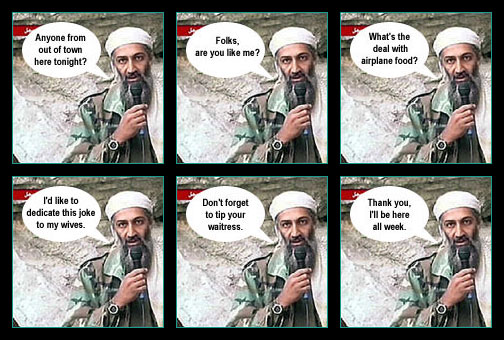